Separated Parents are at Risk of Misunderstanding What is Beneath a Child’s Behavior.

The more the animosity between the separated parents, the more each blames the other for the behavior. It can be a challenge to step back and have a more open mind to the experience of the child amidst the parental dispute. 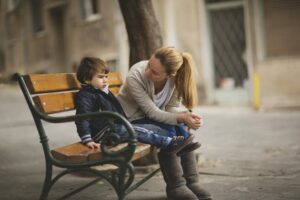 Q: My son is 6 and he sees his father every other weekend. Whenever he returns from seeing his father, his behavior is all over the place and it can take at least a day for him to settle down. How do I get his father to not ramp him up during visits?

A: The only thing known for sure is that when the lad returns from his alternate weekend visit with his father, it takes a while for his behavior to settle.

It may be as you suggest that his father is ramping up his behavior — or there can be other reasons to account for the challenge of settling in.

In the life of a six-year-old, two weeks between seeing a parent can feel like a lifetime. Your son may miss his father and be upset on his return home, realizing it will be a long while before seeing him again. The solution is not less time, nor is it blaming a parent. Rather, it’s looking at how parenting time is structured — with the aim of adding more of it between weekends.

If, as you believe, the issue is the father ramping up the child, it may be that with the two-week gap the father is trying to get in as much fun time as possible. Again, discussing these matters and looking at the impact of the parenting schedule may help.

If the father agrees that he is ramping up your son’s behavior, you and he can discuss a quiet activity that could take place prior to the boy’s return home.

Lastly, and regardless of the reason behind it, you can address your son’s behavior by helping him to reorient to your home.

After your son enters the home and his father has left, take him aside and ask him where he is. This will be a puzzling question, but your son will likely say, “At home.”

Then ask him how you expect him to behave. Again, he may be puzzled by the question at first, but will likely reply with something like “Nicely.”

All you have to do then is thank him for remembering.

And the next time he seems to get ramped up, just remind him of where he is. This reorientation may help him to settle in faster.