I can’t remember who it was, but someone once said to me, “There are five people who will determine what happens in your divorce:” the couple, the two lawyers, and the judge. 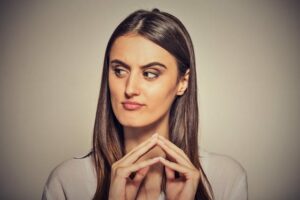 The best way to explain this is to offer examples. If you get a judge who is traditional, he or she might make decisions that will benefit the woman in the divorce. If the judge tends to have a soft spot for single dads, it could benefit the man. If your ex’s attorney has a contentious style, the case will take a lot longer to settle. If you get two attorneys who work well together, the divorce could go a lot smoother. If one or both people getting divorced is angry, the divorce will take longer and the attorney’s fees will be high. If one of the people gets into a new romantic relationship, the other could slow down the divorce process, back out of deals that are already agreed upon, or even act vindictively. So, that is what I think the person meant by saying that.

“One mistake people going through a divorce often make is talking to other divorced people about their settlements.”

One mistake people going through a divorce often make is talking to other divorced people about their settlements. For example, they find out that their divorced girlfriend is getting triple the amount they are considering accepting in alimony and they go crazy, thinking the deal they are about to make is extremely unfair. Another example: a man getting divorced starts dating a woman who has an ex-husband who doesn’t pay child support. Now, all of a sudden, the guy is thinking, “Why doesn’t he have to pay and I do?” The last example I will give is, let’s say a woman going through a divorce is dating a divorced guy who gives his ex-wife so much more child support than she receives and pays for so many more expenses than her ex does. This could cause her to feel her settlement isn’t fair.

The thing is, divorces are complicated and there are countless reasons people settle on the things they settle for. There are so many circumstances: everything from how angry people are, how compassionate the couple is for each other’s circumstances, why they are getting divorced, how old the kids are, how effective the divorce attorneys are, and how the judge rules. I could go on and on. So, if you are comparing your divorce to someone else’s, you really are doing yourself a disservice, and you are wasting energy focusing on a piece of the pie when you can’t see the whole pie.

Instead of comparing your divorce to others, the better option is to trust your attorney, trust the process and trust your gut. If something doesn’t seem right, talk to your attorney. Don’t be afraid to speak up and/or ask questions. Remember that you are the client who is paying your attorney. If you disagree with your attorney or you don’t feel good about what’s going on, no one says you can’t get another opinion and even change attorneys.

“Divorces are complicated and there are countless reasons people settle on the things they settle for.”

I would also advise anyone getting divorced to educate themselves about their state’s divorce laws. Read! And, read every line of a document you are signing. Even if it takes you a whole day to look up every word and understand legalese. Don’t just trust your lawyer and sign it because he or she says “it’s fine.” If you read the documents yourself and you don’t understand what they mean, ask your attorney to spell in out for you in plain English. Don’t be too timid or embarrassed to do so or you will pay the price in the long run. Trust me on this one.

I compare getting divorced to buying a new car. When you walk out of the dealership (or out of the courtroom) you never really know if you got a good deal or got completely ripped off. But, it doesn’t really matter, as long as you feel good about your settlement. And, I think your gut will tell you. So, make sure your gut feels right before you sign anything.

Remember that no divorce is stress-free or even fair, for that matter. And that even the people who seem to be getting so much more than you probably feel like it’s not fair. Try to look at your divorce as an individual, unique case because that is what it is. The best part is that ultimately, you are paying for your freedom—for the opportunity to have a life that makes you happier and to rid yourself from toxicity. Those are things you can’t really put a price tag on.