How to Avoid a Nasty and Costly Divorce War 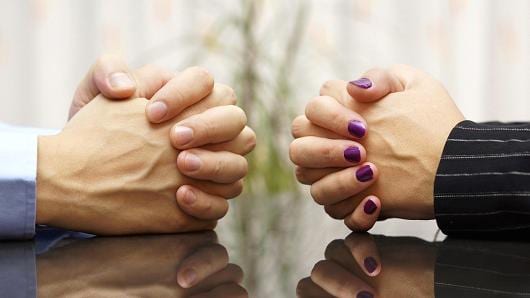 After attorney Joryn Jenkins’ parents divorced when she was seven, she never saw her father again. Experiencing firsthand how divorce can destroy a family forever, Jenkins never wanted other families to go through that. Yet after 35 years of trial work, the attorney was convinced that the grueling divorce court process results in a long and painful experience for the entire family.

So a little more than 10 years ago, Jenkins instituted the technique of collaborative divorce within her practice, which tackles divorce outside of the courts so that agreements can be reached around a conference table and thus be resolved with more dignity and respect.

“By the end of the divorce trial, spouses can become enemies,” said Jenkins, who practices law in Tampa, Florida. “Litigation makes people be mean to each other. … But people usually don’t know that there’s another option,” she said, “and lawyers don’t tell them.”

Seeking kinder, gentler divorces, more couples—usually baby boomers—are turning to collaborative divorce. Besides avoiding courtroom angst, these divorces can also save time and money, along with being less harmful to kids’ psyches.

The process does take a village, though. It’s done with a team of four people—lawyers for each spouse, a mental health coach and financial professional. They work to create workable solutions for a couple rather than pitting one spouse against another in the courtroom.

“The rewards of collaborative divorce are huge,” said Jenkins. “You learn to work out issues and say things in a better way.”

Litigated divorces can also damage the pocketbook. For divorces that go to trial, you may pay $100,000 just to get to the courthouse steps, said Jenkins, as depositions and the like are collected. She explained that an average collaborative divorce costs about $32,000.

Read More >> Getting divorced without breaking the bank

“People are raiding their retirement accounts just to pay for divorces,” said Rackham Karlsson, a collaborative attorney in Cambridge, Massachusetts. “Going to court can be more expensive, more time intensive and corrosive for children.”

Average collaborative divorces can take three to four months to settle, said Jenkins. But trial cases can drag on for three years, she added. And there’s no control over the timing, process or outcome of the case, since judges make the final decisions.

Scott Friedman, a partner at Friedman and Mirman in Columbus, Ohio, said that he has waited 13 months just to get a judge’s decision on a divorce case. Courts gets bogged down with cases, he said. Yet as the trial drags on, frequently over two years, other things must be renegotiated, such as finances. “It’s brutal,” he said.

“Families have been ripped apart when going to trial. Collaborative divorce pushes all that aside.”

Despite courtroom ugliness, some people just want to punish their spouses as long as possible, though, Friedman said. “They’d rather pay attorneys,” he explained. “Even though there’s no guarantee they’ll win in court. You’re not yourself.”

Collaborative divorces, however, are done face to face. Spouses speak for themselves and voice their own interests, along with reaching their own emotional, financial and legal solutions. The divorcing couple can also set their own pace—rather than depending on a judge’s courtroom rhythm.

These divorces are also private, so they work well for very wealthy people who want to protect their information, said Jenkins, unlike courts, where the information can be spread out in files and elsewhere. When American business magnate T. Boone Pickens divorced his fourth wife a few years ago, he used the collaborative model and saved several million dollars in the process.
Yet even collaborative divorces can get ugly. A spouse may storm out of the room. Or financial negotiations may hit potholes. For example, women usually fight to get the home, since they see it as a lifeboat. And people are reluctant to give up pension plan monies. “They feel they’ve earned it with blood, sweat and tears,” said Chris Chen, a divorce financial planner at Insight Financial Strategists in Massachusetts.

Still, dropping out of the collaborative process is rare, added Chen, since your team can help you work through thorny issues.

Also, collaborative divorces have glue that helps bind them. If both spouses don’t reach a settlement, they can leave the process. But they must also hire new attorneys and eventually start over again, said Melody Richardson, a family law attorney at Richardson Bloom & Lines in Atlanta. “Couples that end up going to court are outliers,” she added.

And even kinder solutions like collaborative divorce have their disadvantages. One is that you can lose the power of the court behind you, said Karlsson. “Courts can compel people to produce bank records, employment histories or business accounts,” he said. “But you can’t do that with collaborative divorces, though everyone has agreed to show their finances.”

Couples who have strong power imbalances in communication can also have problems with collaborative divorces, Karlsson said. One might be a pushover and the other dominating, making it harder to effectively negotiate.

“Still, families have been ripped apart when going to trial,” concluded Karlsson. “And collaborative divorce pushes all that aside.”

—By Constance Gustke, special to CNBC.com