Will Your Divorce Be a War Story or a Peace Story? 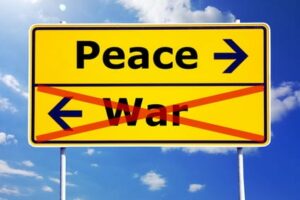 As I picked up The New York State Bar Association Journal earlier in the month, the cover story intrigued me. It was called “More War Stories from the New York Courts.” It was about civil litigation cases that go on for years. The article didn’t discuss divorce, but that’s certainly what was on my mind as I read it.

I can’t imagine any parents would want to subject their children or themselves to the perils and terror of an actual war such as those raging in the Middle East, Africa and other parts of the world. So why are they so willing to subject their families to a war of their own making just because their marriage is ending?

In any war, generals send soldiers to fight the actual battle. In a divorce war, you’re sending your attorney to do all of your fighting for you. Once you start that war, you can pretty much count on the fact that any remaining goodwill between you and your soon-to-be-ex will be hijacked by the litigation process and a reasonable settlement will be that much more difficult to attain. When you’re not talking with your spouse face to face, you’re not able to get a true, intuitional sense of whether the two of you can find common ground. Instead, the gulf between you only widens and you’re more and more reliant on your attorney to interpret what your spouse (aka the “enemy”) is saying and asking for.

This may feel safer in the beginning of the divorce process when your emotions are raw and you can barely stand to be in the same room as your spouse. But, what is the end game that you’re fighting for? If you’re anything like the majority of my clients and their spouses, you BOTH want to feel financially secure in the end; you BOTH want to have a parenting arrangement that works best for your children; and you BOTH want to never have to go through this process again. So why not try a process such as mediation or collaborative law that is focused on finding a durable solution, that meets as many needs as possible, for every member of your family. Instead of a war story, you could have a peace story to tell.

War is hell. Don’t let your divorce turn into a long, messy quagmire, from which neither side will be able to extricate itself. Not only is it unlikely that you will feel you’ve actually “won” but the wounds from the battle can last forever.

To explore the mediation or collaborative process and find a way toward a more peaceful divorce, contact me.