Praise for Adoptive Moms and Stepmoms on Mother’s Day

Mother is a verb. Shared genes are optional.

What do adoptive moms and stepmoms have in common?

They believe that a family is a group of people who love and care for each other, and shared genes are optional. 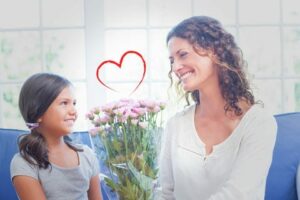 Nature gives birth mothers an advantage when it comes to forming emotional bonds with their children.

During childbirth, both baby and mother are flooded with oxytocin—the hormone that promotes emotional bonding. Most birth mothers report feelings of overwhelming love for their babies, and these feelings intensify as they care for their infants. This is nature’s way of ensuring that newly born, utterly helpless human beings will survive.

The emotional bond also works in the other direction–from infant to mother. Newborns are already familiar with their mothers’ voices because they’ve been listening to them during the last stages of pregnancy. Using playbacks of recorded voices, researchers have found that newborns prefer their mothers’ voices to the voices of other women, and these maternal sounds have a soothing, physiological effect on the infant. Day-old infants also prefer to video playbacks of their own mother’s faces compared to faces of similar-looking women.

Adoptive moms and stepmoms aren’t given these helping hands from nature. Instead, they must earn their acceptance and love from children who often view them as threats to that primary attachment. And yet still these women persist in caring for these children—often and well.

Here are some of the things that people say to adoptive moms in front of their children:

Don’t you have any children of your own?

Why would you want to raise someone else’s kids?

Do you know anything about their real mother?

Are your adopted kids really brothers/sisters?

The explicit message both mom and children receive is this: You’re not a real family.

Adoptive moms learn how to defuse this negative message. Some responses they give to the questions above are:

Why, yes, I do have children of my own. They’re standing right in front of you.

Because my heart is big enough to give love where it’s needed.

I am their real mother.

Yes, they are really brother/sisters—through adoption.

The most valuable thing that adoption specialists tell adoptive moms is this: You will love your children long before they come to love you.

It usually manifests as:

1. Indiscriminate and excessive attempts to receive comfort and affection from any available adult, even relative strangers.

2. Extreme reluctance to initiate or accept comfort and affection, even from familiar adults, especially when distressed.
Tina Traster, an adoptive mother of a orphan, described it this way in her 2014 article in The Atlantic:

Strangers tell me I have the most adorable, precocious, confident child. How can I explain that at home this child is elusive, emotionally closed off, and defiant?
RAD children push away their adoptive parents, tell lies about them to their teachers, and manipulate them emotionally while charming adults outside the family.

Why do these children do this? To stay in control. To never again allow themselves to be betrayed, abandoned, or hurt by someone they instinctively loved. Even children who were adopted as infants can manifest reactive attachment disorder.

Adoptive parents are also told this, which is indeed true:

You will be able to tell when your children are beginning to love you because they will re-double their efforts to push you away. That is how intensely they fear—at a deeply visceral level–becoming attached to another human being.

So how must adoptive mothers parent their kids? As Traster puts it, by constantly reinforcing this message:

“I know it’s scary to love Mommy. But Mommy loves you and she always will.”
That message “rewires” the child’s mind, coaxing them to believe that it is safe to love and trust.

So hats off to all you adoptive mothers! I’m here to say I acknowledge your going above and beyond the call of duty to selflessly heal and love a child who needs you.

Women who fall in love with men who have children from previous marriages typically find themselves thrust into a role that cultures demonize: Stepmother

We all grew up with “wicked stepmother” stories. What child has not heard the story of Cinderella?

It is not surprising, therefore, that research shows that stepmothers have significantly greater anxiety and depression than biological mothers. In Singing the Stepmother Blues, Mary T. Kelly, a psychotherapist who specializes in stepfamily/stepcouple issues explains why:

Only 20 percent of young adult stepchildren report even having positive feelings about their stepmothers. I say with confidence, given my decade-long work with step couples and stepmothers that the overwhelming majority of the remaining 80 percent are not evil… But when one is met with continual hostility, when one’s partner, who feels torn between their children and their new partner, doesn’t intervene in their children’s rude behavior, the isolation and loneliness that ensues is a prescription for a good-sized depression.
University of Missouri stepfamily researchers Marilyn Coleman and Larry Ganong found that warm and loving stepmothers cause the most severe loyalty conflicts for children. The more appealing, attractive, and kind a stepmother is, the more threatened the ex-wife feels by her presence. And the more hostility and resentment she will get from her stepchildren who fear that their mother would feel betrayed the befriend their stepmother.

According to researchers, including Mavis Hetherington and Constance Ahrons, after a divorce, women experience more resentment and anger, and experience it for longer, than do men, who are more likely to nurture fantasiesof reconciliation and work for “smooth sailing” with an ex spouse. Based on her 30-year Virginia Longitudinal Study of life post-divorce, Hetherington concludes that stepmothers are frequently singled out for very bad treatment indeed by stepchildren who pick up on their mother’s anger and resentment and become her proxy in their father’s household. As more than one adult stepchild told me, “My mom wouldn’t like it if my stepmom and I were close.” Often, a stepchild who “hates” stepmom feels that in doing so she is expressing solidarity with her mother. If mom would explicitly give her permission to like her stepmother, and let her know that being nasty to stepmom is not an option, the behavior, and the resentment it stems from, would likely vanish.
In My Son Got A Stepmom, one divorced mother described her journey from resentment to acceptance of her husband’s new wife this way:

I could handle him remarrying, but I hadn’t thought about the next reality – that my son would get another mom. It’s painful realizing that now, without my choice, I was going to have to share the most important role of my life with a woman I barely knew. That’s the role of being a mom. When his dad was single, I was the only mom. Now he has a stepmom… I didn’t like the idea of him calling her mom.
But with time, she came to see her son’s stepmother very differently:  He had another person who is invested in him along with more grandparents, aunts, uncles and cousins. If I wasn’t there or if I died he’d have had backup relatives… Sometimes I think my son thinks we’re all one family living in different houses.

Or as another divorced mother recently wrote in her Open Letter to My Ex-Husband’s Future Wife:  Carefully and respectfully, I welcome you.

This a far cry from the traditional warning stepmothers receive from so-called divorce experts, namely”You’re not their mother, and you never will be.”
So here’s to all you stepmoms who try so hard to love and care you’re your stepfamily. Enjoy Mother’s Day along with the rest of us. You deserve it!