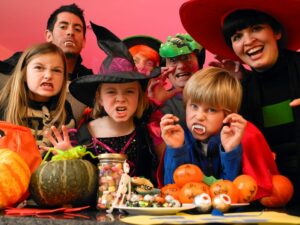 Q. In the past you have suggested that divorced parents both go trick-or-treating with their kids. I hate my ex. We have been divorced for almost five years and she’s still a selfish, obnoxious person and I don’t want to be anywhere near her. I can’t cover up my disgust and that can’t be good for my children to witness—but we did not put Halloween in the parenting plan and we can’t decide whose gets the kids on Halloween. What’s good ex-etiquette?

A. Like you, many parents forget to list Halloween in their parenting plan. While they are negotiating for Thanksgiving and Christmas, Halloween seems like no big deal, but then the day rolls around and the kids are excited and the parents start fighting over whose “time” it is instead of calmly coming to an agreement as to where their children would rather be—which is where their friends are. Making the child spend Halloween in an unfamiliar neighborhood based on the fact that “It’s my time and he’s supposed to be with me” is cruel and very bad ex-etiquette. In those cases, I suggest parents stop the “Your time/my time” battle, and if both want to be with the child, all go trick-or-treating together in the neighborhood that will make the child the happiest. If you can’t be around each other, adjust your parenting plan to alternate Halloween just like any other holiday, starting this year with the parent who lives in the neighborhood where your child goes to school.

That said, you are right, it’s not good for your child to be around the two of you if you can’t stop fighting. Watching their parents fight will undermine a child’s self-esteem and security faster than just about anything else. This is backed up by good solid research studies—ongoing parental conflict is detrimental to the children’s emotional and intellectual development. Even the most selfish angry parents don’t want that for their children, so if you are still fighting almost five years after your break-up, shame on both of you! “Put your children first,” (Ex-etiquette for Parents rule #1) and find a good co-parenting class or counselor and learn the tools you need to properly co-parent. It’s emotional abuse and certainly not in the child’s best interest to make your child witness what you describe. Fix it fast.

Finally, any holiday is just one day. If, at the end of the year, one parent has one more day with their child than the other, so what? Your child is not keeping track. What he does know is how angry his parents are and how badly that makes him feel. You never know, if you set the example this time by making a decision that is obviously in your child’s best interest, your ex, no matter how obnoxious you feel she is, may wise up and begin to do the same. Your child needs a hero. It can be you. Better yet, it can be mom AND you.