Confessions of a Part-Time Mom

Divorce and shared custody suits me, and it suits my kids, too. I am far more able to be present knowing that, sooner or later, I get to be absent.

By Lara Bazelon from the AAML Weekly Eblast 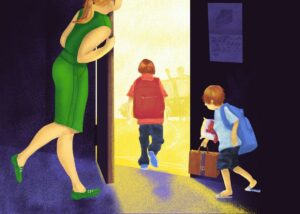 Not me. I rarely feel bad when my kids are with their father. For a while, I felt bad for not feeling bad. Finally, I realized what plenty of other divorced moms figured out long ago: Divorce suits us, and actually, it suits our kids. Staying together “for the sake of the children” is not doing them any favors. Kids know everything. They know when they’re serving as the glue to hold together a teetering house of toothpicks that should have been dissembled a long time ago. They need joy and security. Cordial exes may be in a better position to give them those things than a married couple who make each other miserable. Most women don’t say so, though, for fear of getting tarred and feathered.

There is, rightly, a growing acceptance that it is not necessary to be Ward and June Cleaver to produce happy, successful, well-adjusted offspring. Families come in all shapes and sizes now, biological, fostered, and adopted, and in any number of racial, ethnic, religious, and gender combinations. What’s less accepted is the idea that divorced co-parents can produce happy, successful, well-adjusted offspring. Nearly half of all marriages end in divorce. Many more are deeply unhappy, even toxic. Some people stay together out of fear—of being alone, of the social stigma of divorce, of what are often profound economic consequences. Fear that the alternative could be worse is not a foundation for a happy union, and yet we cling to the idea that children need two full-time parents under the same roof to thrive.

Could the converse be true—that some parents are better as part-timers, and their children are better off as a result? I have always liked to spend time by myself. What I did not realize is how much my parenting would improve if I got to spend time by myself. Many of the things I need to feel human are child-unfriendly. These include having time to write, work, go running, and have long, lazy conversations with friends over drinks and dinner. Many of the things that make me feel subhuman involve the endlessly repeating, mind-eating, vocabulary-impoverishing rituals—the butt wiping, teeth brushing, and hand washing of wriggling, resistant bodies, the “no, no, NO”—that constitute much of child rearing.
When I was married, my coping method was to retreat to an inner world with virtual but soundproof walls. “You’re not present” was the common refrain. Often that was true. Rather than live in the slow-motion moments of tantrum throwing and sibling-on-sibling violence, my mind went elsewhere: to the book I was writing, to a case I was working on, to anything except the two small people actually in front of me. Who wants to be “present” for this? I wondered as I crawled around the kitchen floor on my hands and knees trying to sop up every last smashed Honey Nut Cheerio with a wet paper towel.
“You are getting on my last nerve.” That is what my eighth-grade math teacher used to tell my class before the hammer came down. I envied her, because the warning implied that she had more than one nerve that we could hop on before she lost her mind.

I told myself to be grateful. Not everyone who wants children gets to have them. But knowing that motherhood is a piece of good fortune did not help me enjoy rainy weekends, endlessly accumulating laundry, and the nonstop whack-a-mole of tidying up.

By Day 5 with the two of them—outnumbered, outsmarted, and outrun—I am done. Seeing my ex-husband’s car coming into the driveway, I exhale with relief. On the flip side, by Day 5 on my own, I am sad and lonely, particularly if there were no intervening school events, sports games, or joint family outings. But missing my kids has a positive effect on my parenting. When their dad drops them off and they ring the doorbell over and over, yelling “Mom!” as they jump up and down, I rush down the stairs to let them in. I feel happy and grateful and head over heels in love.