8 Texts You Should Never Send Your Ex 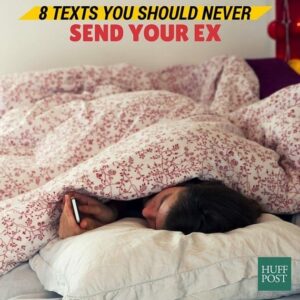 After a divorce or bad breakup, do yourself a favor and don’t press send on that overly emotional text. An angry text about the kids could come back to haunt you as evidence in divorce court — and that 2 a.m. “Hey, what u up to?” text will only leave you embarrassed the next day.

What else should be left unsaid? Below, divorce experts share the most damaging texts people send their exes.

1. “I miss you.”
Before you send a text saying “I miss you,” think about if you really miss your ex or if you’re just lonely and not used to being on your own, said Laura Miolla, a professional divorce coach based in Boston.

“That’s a confusing text to send after a divorce,” she said. “It’s vulnerable, but it’s also manipulative. It’s a classic push-pull that reinforces some kind of relationship, even if it’s not the kind you want, so that you don’t feel quite so lonely.”

Pause before you hit send and remind yourself how far you’ve come, said Miolla: “You need to let go of what isn’t serving you, so you can open the door to something that does.”

2. “You’re the *(&^$#@ worst parent.”
Don’t be so quick to send that expletive-filled text about your ex’s parent skills — or lack thereof. That angry little missive may end up costing you big time in divorce court, reminded Debbie Martinez, a life coach who specializes in divorce.

“I tell my clients that the general rule of thumb here is not to put anything in a text that could potentially come back to haunt you if your children saw it or it it got passed around,” she said. “Trust me, exes will pass it around to others or in a court of law.”

“Any version of the booty call, while drunk or sober, must be resisted,” said Tracy Schorn, the author of Leave a Cheater, Gain a Life: The Chump Lady’s Survival Guide. “The ‘bargain’ you’re striking is this: if this person can’t be my spouse, then maybe we can be friends with benefits. But remember: your ex is your ex for a reason; maintain your boundaries and your self-respect.”

4. “I thought we said we’d wait to date until the divorce was finalized. Don’t forget to help the kids with their school projects this weekend. BTW, I never liked your mom.”
Try to adopt a “just the facts, ma’am” approach to communicating with your ex, saidLeslie Petruk, a marriage and family therapist based in Charlotte, North Carolina. (In other words, calmly ask if they can help with your son’s book report over the weekend — and don’t even think about bringing up their post-divorce dating habits.)

“Keep emotions out of texts to your ex,” Petruk said. “If you have children or business that you need to communicate about keep it strictly on those topics. Emotional texts will only lead to emotional reactions or no response at all.”

5. “Who is that in your new pic?”
Your first impulse after seeing a tagged photo of your ex with a new love interest may be to turn into an angry divorced version of the Hulk. Before you let anger get the best of you, call a personal time-out, Martinez urged.

6. “You’re two months late on child support!”
If enforcing child support or custody arrangements becomes a problem, resist the urge to fire off a nasty text or e-mail, Schorn said.

“Don’t do the heavy lifting on enforcing child support. Let the state and law do that,” she said. “If a polite reminder doesn’t cut it, invective isn’t going to shame your ex into paying. Spare yourself the emotions, and let the law of natural consequences do the work for you.”

Before it even gets to this point, it’s worth downloading a co-parenting app to neutralize communication with your ex.

Don’t go for the low blow and dwell on the past, Miolla said. What purpose does a mean-spirited text serve but to escalate the situation and bring you one step closer to a high-conflict divorce?

“Saying something like, ‘you were worthless’ to your ex cuts to the core,” she said. “This text will likely only cause confusion and questioning for you. Sometimes it’s thrown out because it’s how you secretly feel about yourself.”

8. “I wish we could talk.”
If you genuinely need to talk about the state of your relationship, don’t send a text. Make a point to tell your ex in person, Petruk said.

“It’s easier to say things via text that you wouldn’t be inclined to say in person,” she said. “If you can’t say it in person, then don’t say it at all.”